Think of Germany, and dense forests, broad rivers, medieval towns, and the majestic Alps spring to mind. But the country is also known for its beautiful lakes. They are fantastic to visit in any season — they’re fairy tales in the winter, covered in snow or frozen over, and sparkling delights in the summer.

At Lake Constance on the Swiss border, you’ll find a tropical island paradise, and Lake Starnberg near Munich holds the mystery of a king’s death. Some of the lakes are in the north, and some are in the south, but each has its own charms. 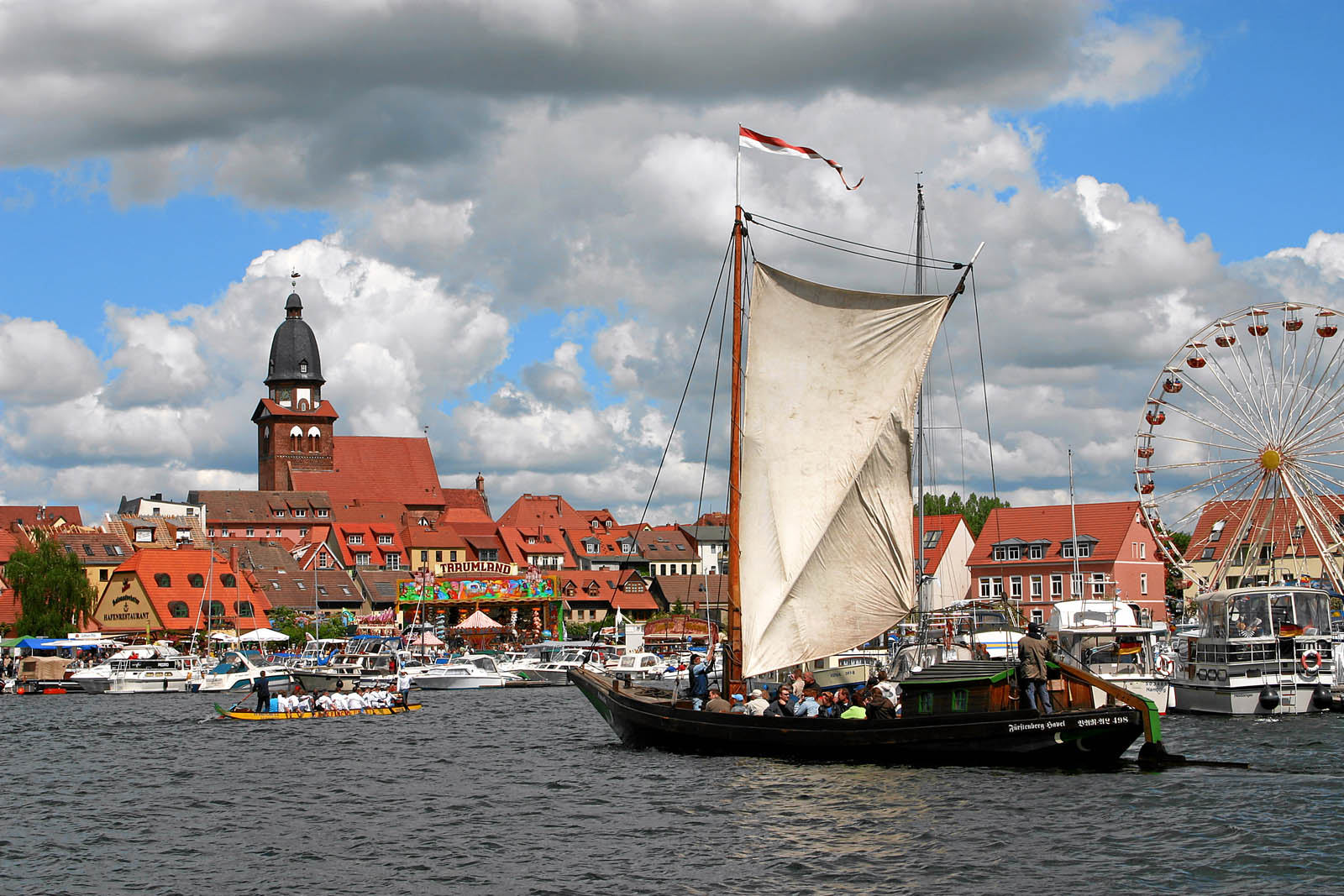 Located in the north of Germany, in a region called Mecklenburg-Vorpommern, Lake Muritz is Germany’s second-largest lake and the largest lake located entirely on German soil. Forming part of the Mecklenburg Lake District, also called the Land of 1,000 Lakes, the surrounding landscape is entirely flat, as opposed to the landscapes in Bavaria mentioned later.

On one side, the lake is bordered by Muritz National Park, a fantastic sprawl of swamp and forests, and a biodiverse park that will delight nature lovers. The flora and fauna are all protected, and well-marked hiking trails invite you to explore this unique part of Germany. You can easily explore the interconnected lakes of the region by renting a boat or canoe.

There are interesting things to see and do on land as well. For fans of archaeology, a visit to the Heinrich Schliemann Museum in Ankershagen is a must.

Waren is a pretty town on the northern end of Lake Muritz with a museum showcasing the culture, flora, and fauna of the region and two 13th-century churches. Robel is a picturesque town on the western shore of Lake Muritz.

Berliners love their Wannsee. Fed by the Havel, which flows through Berlin, it’s actually two lakes connected by a bridge. At the western rim is the Glienicker Brucke or “Bridge of Spies”; during the Cold War, captured agents were exchanged there. In the summer, the lake brims with boats of all sizes, from ferries and sailboats to dinghies.

One of the lake’s most popular attractions is the Strandbad Wannsee, one of Europe’s largest inland beaches. The sand is imported from the Baltic Sea. There is even a secluded stretch for those who want to sunbathe in the nude.

Pfaueninsel, or Peacock Island, sits close to Wannsee in the Havel. King Frederick William II of Prussia built an idyllic castle there surrounded by parks and gardens. It’s now a popular destination for tourists and locals alike, with peacocks roaming freely. The island can only be reached by a small ferry.

Several other historic buildings are in the vicinity. But one of the pleasures of a trip to Wannsee in the summer is simply to sit in a cafe and enjoy a Berlin specialty: Weisse mit schuss, a huge glass of wheat beer with a dollop of raspberry syrup.

Winters are cold in the north of Germany, and sometimes part of the lake freezes over. During this time, you can skate on the lake — but with caution.

Maschsee is an artificial lake just south of the city of Hanover. Created as a place of recreation and water sports, the lake is extremely popular. Rowing, sailing and many other water sports are available. Maschsee is a favorite with hikers and joggers, too, since many paths lead around the lake.

In the winter, the lake often freezes over. If the ice is thick enough to step onto it without danger, a flag is raised, and skaters come out in force. There are also ice hockey matches. In the summer, a weeklong festival is held at the lake, complete with musical performances and fireworks.

The city of Hanover is worth a visit, and so is the nearby castle of Herrenhausen, a prime example of baroque architecture.

Situated at the northern end of the Alps, Lake Constance comprises three bodies of water formed by the Rhine. Germany, Switzerland, and Austria all border the lake, with the largest amount of coast being in Germany.

You could easily spend two days exploring the many attractions on and around the lake. A variety of boat tours are available. One highlight that’s not to be missed is the Austrian town of Bregenz, which hosts a breathtaking festival on the water that usually takes place in July or August. The festival stage is located right over the water.

There are three islands in Lake Constance, the most exotic being Mainau, known as the Flower Island. The island’s favorable climate allows for tropical vegetation. If you’re traveling with the family, you simply must make time to see the island’s stunning plants and flowers, marvel at the baroque palace and chapel, and let the grandkids explore the zoo and butterfly house.

At the foot of the Alps in the region of Chiemgau is one of Germany’s most romantic lakes. Chiemsee is bordered by a lovely Bavarian town, Prien m Chiemsee, which is the starting point for a boat trip that will take you to two islands in the lake. Fraueninsel boasts a monastery and many art galleries, and Herreninsel is home to King Ludwig II of Bavaria’s last dream castle, Herrenchiemsee.

The lake offers water sports and sailing in the summer and ice skating and walks in the snow-covered woods in the winter.

Lake Starnberg, Bavaria’s second-largest lake, is a mere 30 minutes south of Munich. With the gigantic Wettersteinwand in the background, the lake is popular as a recreation venue for the citizens of Munich and was a favorite of King Ludwig II of Bavaria. A boat tour around the lake is the best way to see the idyllic places along the shore. Stop at Schloss Possenhofen, where the king loved to meet with his cousin, the Empress Sisi of Austria, and visit Schloss Berg. It was here that King Ludwig, together with his personal physician, drowned in mysterious circumstances in 1886. A cross and a chapel mark the place.

Located next to the Berchtesgaden National Park in Bavaria close to the border with Austria, Konigssee is Germany’s third deepest lake and famous for its extremely clear water. The lake, which has only one small outlet, resembles a Norwegian fjord because of the sheer and steep mountain cliffs that drop straight into the water. This structure makes for an impressive echo, something the boat captains like to demonstrate by blowing their horns.

Only electric boats are allowed on the lake, and there are hiking paths along the shore. Caution is called for since this is much rougher terrain than at the other lakes. But the wildlife is incredible, especially the golden eagles.

On a peninsula halfway down the lake is the Church of Saint Bartholomew, a world-famous pilgrimage site with a distinctive red roof and the majestic Watzmann Mountain in the background. It’s easier to reach by boat — on foot, it takes hours on a difficult mountain path. The lake freezes over in the winter, but it’s not advisable to step onto the ice.

Titisee is an idyllic lake in the Black Forest near the town of Neustadt. At the other end are whitewater falls. Neustadt is best known as a spa town and center for Kneipp hydrotherapy treatments. It’s also a very popular winter resort town. In the summer, the lake is perfect for swimming, sailing, and even windsurfing.

This very shallow lake is located in Lower Saxony, about 19 miles northeast of Hanover. It’s a favorite summer destination. The town of Steinhude sits on the shore, and a pedestrian bridge connects it to the artificial island of Badestrand Steinhuder and its fun beach. Swimming and sailing are both popular here.

One of Germany’s deepest and largest alpine lakes, Walchensee, is located about 50 miles south of Munich. The lake is surrounded by wooded mountains, with the island of Nassau in the middle. It’s the perfect summer retreat for swimmers, sailors, and windsurfers, as well as for scuba divers, who can explore shipwrecks in the deep, clear waters.

A gondola will take you up to Herzogstand, from which you can go on several hiking trails. If you want to experience rural Bavaria, excellent food, and pretty houses, this is the ideal destination for you.

17 Best Things to do in Curacao

Gardens And Parks In Germany Can Be Soothing To Your Soul

5 Things to Avoid During the Car Buying Process

10 Iconic Skyscrapers around the World

17 Greatest Waterfalls in the World

11 Things About James Cameron’s Avatar You May Not Know