USA’s 50th state is a world-famous holiday destination for good reason. Despite boasting a population of fewer than 1.5 million people, the archipelago’s eight main islands punch well above their weight on the world stage – welcoming millions of visitors every year through their mix of spectacular volcanic landscapes, balmy tropical temperatures, stunning surfing action, unique wildlife, and rich culture. Hawaii’s picturesque topography has also graced countless cinemas and TV screens over the decades – no doubt enhancing the island chain’s reputation as something of a tropical paradise. But, before you rush off to buy tickets to your own Pacific adventure, you might want to brush up on Hawaii’s many charms. Start by looking for a place to stay among the best yoga retreats and camper rentals in the state. Read on for a list of just some of the things Hawaii is famous for.

You may have perhaps owned one or two of these in your lifetime, or at least seen one! Also, you may have come across a version of this during your office theme parties or summer family reunions. Often referred to as a Hawaiian shirt, this vibrant dress shirt features a collar and buttons, sometimes to the bottom of the shirt, sometimes just down to the chest. They typically don short sleeves and are cut from funky printed cloths. In the state, this comfortable clothing is also worn as informal business attire.

Hawaii is, arguably, one of the best sources of delicious, succulent, and refreshing pineapples. It is also home to the “Pineapple Experience” that is Dole Plantation. It originally started as a tiny fruit stand in the 1950s and has grown to become a vast plantation that opened almost 4 decades later in 1989. If you’re looking for a fun experience, take a closer look at what this famous Hawaii attraction can offer: the Pineapple Express Train Tour, the Plantation Garden Tour, and of course, the Pineapple Garden Maze.

Hawaiians take their food seriously, be it the luxury Kona coffee that is grown on the archipelago – and which is among the most expensive coffees in the world – to the simple charms of tinned Spam…with a characteristic Hawaiian fusion twist. And no, you didn’t read that wrong – I said Spam. It might sound like a punchline from a Monty Python sketch, but Hawaiians really do love their Spam musubi – the self-same Spam that John Cleese, Terry Jones, Michael Palin et al spent so much time lampooning back in the 1960s. In Hawaii, it is enjoyed as comfort food – and in a big way! Some six million cans of the processed pork are consumed on the archipelago every single year – or five cans for every person. That’s a lot of Spam.

What is Hawaii known for that we perhaps all enjoy as well? Speaking of food, one of Hawaii’s most famous contributions to the world is the Luau. Hawaiians know how to party, and these communal feasts – which are celebrated under canvas in outdoor areas – are a fine example. Boasting traditional Hawaiian music and such mouth-watering dishes like Kalua pig, poi, Lomi salmon, and beers, they have become a world-famous icon of the islands. However, it may surprise you to learn that they are a relatively recent addition to Hawaii’s history – dating back as recently as 1819 when the then king ended long-standing religious taboos which had hitherto prevented men and women from taking meals together or eating certain foods. No wonder they wanted to party.

What is Hawaii famous for? Vacations, we’re telling you! Hawaii’s location in the middle of the Pacific means it enjoys some beautiful tropical weather. Throw in its stunning volcanic landscape (more on that a little later), its picture-postcard beaches, and its surf and it’s little wonder that the USA’s 50th state is a world-famous vacation spot that has earned itself the nickname of the Paradise of the Pacific. Indeed, its presence in innumerable movies and TV series – from Jurassic Park to Magnum P.I. – has only added to the islands’ allure in recent decades.

And speaking of beautiful scenery, if there’s one thing a visitor to Hawaii is guaranteed to see – it’s stunning landscapes. The archipelago has drawn legions of visitors to the islands down through the ages – and it’s easy to see why. It boasts no fewer than two national parks and three national historic parks and is home to such iconic landscapes as the Kualoa Ranch on Oahu – of the aforementioned Jurassic Park fame. And it’s by no means the only picturesque location to enjoy. Indeed, the second largest island in the group, Maui, has almost become a byword for paradise locations. And then there are the likes of Mauna Kea on the Big Island, which towers 13,796 ft (4,205 meters) above sea level and is actually taller than Mount Everest if you measure it from its base on the ocean floor. That’s big!

It will come as little surprise that an island archipelago like Hawaii is a mecca for water sports enthusiasts. Its location amid the trade winds of the mid-Pacific has made it something of a surfers’ paradise – the big waves and turquoise waters have cast their spell on many a visitor. But it isn’t just surfing that brings water sports enthusiasts to flock to the islands. They are naturally a popular sailing spot too. And the reefs and atolls of the archipelago are also a huge draw among snorkelers and scuba divers, eager to encounter some of the spectacular marine species that call Hawaii their home. Indeed, the islands act as a natural barrier to the ocean’s currents, which dredge up a rich soup of nutrients from the deep as they hit the archipelago. This has made the local waters exceptionally fertile for sea life – from green turtles to spiny lobsters and much more.

Hawaii’s status as the USA’s most southerly state and its location within the tropics means it enjoys balmy temperatures year round. Daily highs typically rise to between 28 and 31 degrees centigrade depending on the time of year, while night-time lows are 18 to 24 degrees. This remarkable consistency – plus the effect of the trade winds in reducing relative humidity – has made Hawaii something of a ‘paradise’ for tourists from around the world. Of course, while this holds true of the archipelago as a whole, each island has its own climate quirks. Its position in the middle of the largest ocean on Earth means it is no stranger to tropical storms, while the sheer height of the likes of Mauna Kea and Mauna Loa means snow is not uncommon on their upper slopes.

Hawaii’s rich and diverse culture is a result of its history as something of a melting pot for different peoples. The native Polynesian influences, which were once suppressed by the authorities are today embraced by the 1.4 million people who call the islands home. For instance, luaus are a common tradition when celebrating a child’s first birthday, while the Polynesian love of surfing has truly conquered the world. And then there are the cultural influences that have made their presence felt through successive waves of immigration. Hawaii’s love of food – already mentioned – is a fusion of all manner of different cuisines from around the world – from American and Portuguese to Chinese and native Hawaiian.

One of the greater things Hawaii is known for is its flora. The archipelago’s isolated location in the middle of the Pacific – as well as its diverse range of landscapes and habitats – have made it something of an evolutionary hotspot through the eons. Dozens of species are unique to the islands. This is especially true of its bird populations, which feature everything from the critically endangered Laysan duck to the Common ‘amakihi to the Hawaiian crow, the latter of which is extinct in the wild but subject to a reintroduction program. The archipelago also boasts innumerable fish species and invertebrates, as well as two indigenous mammals – the Hawaiian monk seal and the Hawaiian hoary bat – both of which are endangered. Naturally, there have been steps to try to protect Hawaii’s rich wildlife, and there are a number of national parks. And then there’s the Papahānaumokuākea Marine National Monument, which covers more than 140,000 square miles (360,000 sq km) of the ocean – larger than all of the USA’s national parks put together. 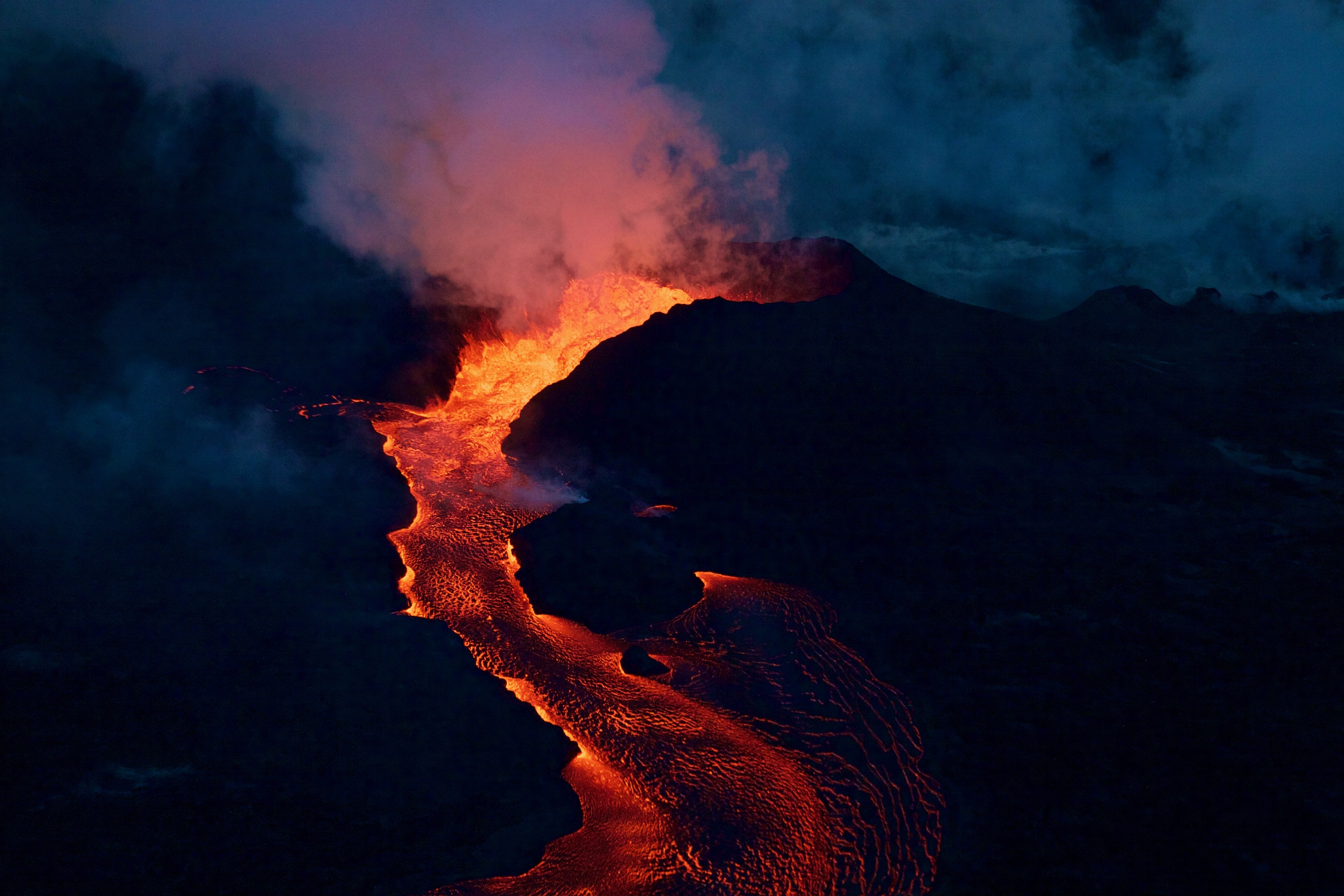 Hawaii owes its very existence to volcanic activity, so it’s little surprise that volcanism is one of its most famous characteristics. The archipelago sits above a mantle plume – a magma hot spot that has punched its way through the Earth’s crust to create each island in turn over millions of years, in a process akin to a giant geological conveyor belt. Indeed, this process can be seen in the islands’ very layout – their arrangement in a loose line is the direct result of continental drift over the stationary hot spot. Each island was slowly built up over millions of years of volcanic activity before slowly moving to the northwest and away from the plume. A new island then forms in its place and the whole process repeats again. Naturally, this means the Big Island, which currently sits above the hot spot – and is formed out of five different shield volcanoes – boasts some of the youngest rocks in the entire island chain. It is also home to the only currently active volcanoes in the archipelago – including Kilauea, which has been erupting continuously for the past 35 years.

No list of things Hawaii is famous for is arguably complete without mention of the Hula. This famous thing in Hawaii, which has charmed its way across the world and entered the global consciousness, is actually not one dance, but many different forms – such as the ancient Hula which predates western influence, and the Hula ‘Auana. Once suppressed, today this important part of Hawaiian culture is flourishing, thanks to a resurgence in the 20th century when the dance form featured in documentary film footage and sparked a surge in interest. Indeed, it is such a draw for tourists that the likes of the Merrie Monarch Festival – a week-long hula competition that runs every spring – have been charming tourists from across the globe for more than 50 years.

12 Best Things to Do in Peoria, IL

12 Best Things to Do in Hershey, PA

11 Actors Whose Incredible Acting Abilities In Their Contrasting Roles

The Badass And Chilling Watercolor Paintings Of Misha Vyrtsev

Why Is Intelligence So Important In life